9[Jesus] also told this parable to some who trusted in themselves that they were righteous and regarded others with contempt:10“Two men went up to the temple to pray, one a Pharisee and the other a tax collector. 11The Pharisee, standing by himself, was praying thus, ‘God, I thank you that I am not like other people: thieves, rogues, adulterers, or even like this tax collector. 12I fast twice a week; I give a tenth of all my income.’ 13But the tax collector, standing far off, would not even look up to heaven, but was beating his breast and saying, ‘God, be merciful to me, a sinner!’ 14I tell you, this man went down to his home justified rather than the other; for all who exalt themselves will be humbled, but all who humble themselves will be exalted.” (NRSV)


At 9:50 this morning, we rang our church bells eleven times… because one year ago today, a gunman burst into the Tree of Life Synagogue in Squirrel Hill, killing seven worshippers and wounding six more. He allegedly shouted “All Jews must die” during the attack.

In today’s Gospel, Jesus speaks a parable about two men who walk into the Temple to pray: one a Pharisee and the other a tax collector. The Pharisee, standing by himself, prays “thank you, God, that I’m not a miserable sinner like thieves, rogues, adulterers, and that tax collector.”

I hear the Pharisee’s contempt for the tax collector, and others, in the echo of the gunfire that shattered the holy silence inside Tree of Life one year ago. The shooter was a man whose contempt for Jews, immigrants, and human life in general, had consumed him to the point of violence.

Throughout the Gospels, we witness the Pharisees’ utter contempt for Jesus. They antagonized him at every turn. They were among those directly responsible for conspiring with the Pontius Pilate government to have Jesus crucified.

Yet for as often as Jesus clashes with the Pharisees, and as harshly as Jesus speaks to them, at no point does Jesus ever declare that they are beyond the reach of God’s grace.

Truth is, it wasn’t a sin to be a Pharisee. They were part of a movement within Judaism that emphasized strict obedience to the Law of Moses. This wasn’t so much about snobbish legalism as it was a concerted effort to bind themselves to God and each other in a world where the social and cultural forces of the Roman Empire constantly threatened to tear them apart.

If, then, we lump all Pharisees into being enemies of Jesus, and associate all Pharisees with hypocrisy and self-righteousness, we become guilty of the same sin as this Pharisee.

Jesus’ parable is not an indictment on Pharisees as it is an indictment on anyone and everyone who would single out their neighbor as an enemy beyond the reach of God’s grace. And we do this all the time.

Life in this complicated world becomes much simpler when you adopt a binary view of reality—reducing life into a struggle of good versus evil. It’s quite a boost to your self-worth to place yourself on the side of God, the angels, and everything good. And who wouldn’t want to be the mighty hero who vanquishes evildoers, like Batman, Superman—or even biblical heroes like David and Joshua? The synagogue shooter certainly saw himself this way… as a hero.

God, however, doesn’t operate this way. The cross makes this undeniably clear. And the promise of redemption through the cross is not subject limitations we humans may see fit to impose upon others—or even on ourselves.

Living decently doesn’t give anyone bragging rights. It doesn’t make you a hero. And it certainly isn’t going to get you any closer to God. God can’t raise you up to new life as long as you sit atop your high horse!

All anyone can do is what the tax collector does: to say, “I know I’m wrong, and I can’t make myself right. God, have mercy on my life” And Christ, through the cross, makes you right with God. And no one—not this tax collector, not this arrogant Pharisee, nor even the synagogue shooter—is beyond the redemptive power of God. If, perhaps, you’re riding high on your high horse, God may have to knock you down! It happened to the Apostle Paul—who, incidentally, was a Pharisee!

The invitation for you, then, is to throw away the contempt you have for others—whether you see them as having cheated into privilege, or a disease upon all that is good and decent in the world. This contempt suffocates the life of God out of you and makes the world even darker than it already is.

Truth is, you have something to learn from everyone you look down upon: fundamentally, that God never regards you with such contempt—even when you are unrepentant. God is nothing like those who stoke fear and hostility towards the “other.” The hallmark of bad religion is an arbitrary set of criteria to summarily judge good and evil; who’s eligible for eternal life, and who’s bound for destruction.

Furthermore, there are people everywhere (and you may be one of them), who know nothing but contempt—due to either tragic misfortune or the sins they’ve committed and/or the poor choices they’ve made. They’re stuck. They’re losing hope. And in many cases, they’re dying. They can’t help themselves. The grace and mercy they need, just to get by, is nowhere to be found. You can’t pull yourself up by the bootstraps when you don’t have boots! Yet when sinners answer with contempt, God answers with mercy. And there’s no better way to know the wideness of God’s mercy than to get off your high horse and join Christ in lifting up the lowly. There is no contempt in the kingdom of God—and with a little bit of mercy, patience, forgiveness, and grace we will all taste the resurrection life.

Until You Bless Me: Genesis 32:22-31 - Nineteenth Sunday after Pentecost

22The same night [Jacob] got up and took his two wives, his two maids, and his eleven children, and crossed the ford of the Jabbok. 23He took them and sent them across the stream, and likewise everything that he had. 24Jacob was left alone; and a man wrestled with him until daybreak. 25When the man saw that he did not prevail against Jacob, he struck him on the hip socket; and Jacob’s hip was put out of joint as he wrestled with him. 26Then he said, “Let me go, for the day is breaking.” But Jacob said, “I will not let you go, unless you bless me.” 27So he said to him, “What is your name?” And he said, “Jacob.” 28Then the man said, “You shall no longer be called Jacob, but Israel, for you have striven with God and with humans, and have prevailed.” 29Then Jacob asked him, “Please tell me your name.” But he said, “Why is it that you ask my name?” And there he blessed him. 30So Jacob called the place Peniel, saying, “For I have seen God face to face, and yet my life is preserved.” 31The sun rose upon him as he passed Penuel, limping because of his hip. (NRSV)
When we lived in Gettysburg, the sign in front of Dairy Queen read: “scream until daddy stops.”

That is good advertising! 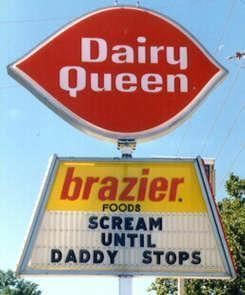 I don’t know, but I would bet that this is effective advertising.

But does this work with God?

So what are we supposed to think about this widow who appears to take a page out of the four-year-old’s playbook by incessantly begging a judge for justice?

To be honest, I admire her tenacity and courage. She knows that the judge “neither feared God nor had respect for people” One wonders if the judge could have had her imprisoned or killed—or, at minimum, imposed a restraining order against her. Nevertheless, she persisted—and she got justice.

It’s almost as if Jesus is emboldening God’s children everywhere to scream until they get what they want! It works for Dairy Queen!

The TV preachers say, “name it and claim it;” pray, believe, and it will be yours.

But can you wrestle what you want from God, as long as you ask enough? Believe enough? Become good enough?

My issue with prosperity Gospel is the notion that you as a human being can prevail upon God to get what you want, if only you can master the art of doing it right.

But consider Jacob: an assailant attacks and fights with him until daybreak. When the assailant fails to defeat Jacob, he strikes Jacob on the hip socket and knocks it out of joint. But still, Jacob is not defeated. He will not let his assailant go without giving him a blessing. He gets the blessing, along with a new name—Israel—which means “he wrestles with God.”

What we see here, then, is not persuasion or forceful manipulation—especially as far as Jacob is concerned. He didn’t pick a fight God; if anything, God picked a fight with him! This makes me realize just how much of the Christian life is a wrestling match with God. After all, God is God, and you’re not. Your will and God’s will are not one and the same. Your sin, selfishness, and ignorance separate you from God. Sometimes, God must fight them out of you.

Prayer, at times, can be an intensive wrestling match with God. Sometimes, it feels like you’re talking to the wall, and you want to give up! If God’s mind is made up, why bother? But that illness won’t go away. That pain keeps getting harder. The way forward grows increasingly unclear. The world keeps spinning out of control. There’s no justice or peace to be found.

But Jacob and the widow persist—and they prevail. I would argue that God prevails, too—and not as a parent who buys their screaming child ice cream for a few moments of silence. God prevails because Jacob and the widow are radically transformed through their struggles. Jacob is better prepared to be the namesake of God’s people. The widow and all who know her see God’s justice.

God prevails because God loves blessing people. God loves it even more when those children see God’s love in the blessings.

Sometimes, you must fight your way into God’s blessings—because it’s difficult to know something as a blessing if you didn’t have to struggle for it.

And it’s strange to think about God that way—because we don’t typically associate love with tackling someone on the side of the road and pulling their hip out of the socket! But faith begins with God’s initiative—and how else is God going to draw you out of sin and selfishness into new life? How else is God going to get off the path you’re on and onto the path God wants you to walk? How else can you and God become of one mind and one heart? Your relationship with God, like your relationships with people, grow through struggle. And that’s not a bad thing.

We wrestle with God. And God wrestles back. And we won’t give up until God blesses.

More important than praying the right words or having a strong faith is your refusal to surrender the struggle, because when you do, it’s the devil who wins. You may give up, but God never does.

What will you be wrestling with God about today? And not just for yourself, but for the neighbor, for the world, for the sake of Christ’s mission in the world?

Remember how Jesus wrestled with God at Gethsemane: “take this cup from me, I pray… But not my will, but yours be done.” Out of that struggle came the salvation of the world.


Posted by Pastor Jim Arter at 7:30 AM No comments: