Jesus entered Jericho and was passing through it. 2 A man was there named Zacchaeus; he was a chief tax collector and was rich. 3 He was trying to see who Jesus was, but on account of the crowd he could not, because he was short in stature. 4 So he ran ahead and climbed a sycamore tree to see him, because he was going to pass that way. 5 When Jesus came to the place, he looked up and said to him, “Zacchaeus, hurry and come down; for I must stay at your house today.” 6 So he hurried down and was happy to welcome him. 7 All who saw it began to grumble and said, “He has gone to be the guest of one who is a sinner.” 8 Zacchaeus stood there and said to the Lord, “Look, half of my possessions, Lord, I give to the poor; and if I have defrauded anyone of anything, I pay back four times as much.” 9 Then Jesus said to him, “Today salvation is come to this house, because he too is a son of Abraham. 10 For the Son of Man came to seek out and to save the lost.”

Not too long ago, I collected the day’s mail—and printed on the outside of an envelope were the words “WE WILL FIND YOU.”

Inside was a letter from the Pennsylvania Department of Revenue, stating that I was delinquent on my tax returns from 2006—and that I’d better pay up (with penalties and interest), or face jail…

Well, I lived in West Virginia in 2006—and the matter was easily resolved…

But for all the unpopularity of the IRS and the state and local tax agencies, there was no one more hated in Jesus’ day than the tax collectors.

These were men selected by the Roman government from the elite social classes to collect taxes in their districts and neighborhoods.  The government didn’t pay them, but instead gave them free rein to collect extra taxes in order to make a profit—and as you can imagine, fraud and corruption were rampant. If you didn’t pay up, they’d call in the Romans, and you’d go to prison.

The man Zacchaeus was a chief tax collector—which made him especially rich, especially powerful—and especially hated…  One wonders if he needed bodyguards when he was out in public.

When Jesus comes to town, Zacchaeus wants to see him.  Since he can’t see Jesus over the crowd, he climbs a Sycamore tree—and Jesus spots him immediately.  To everyone’s shock, Jesus tells Zacchaeus to come down immediately—because Jesus will be staying at his house today.

People can’t believe what they’re seeing, because they know Zacchaeus.  To them, he’s the scum of the earth.  And yet, Jesus is honoring him by becoming his guest.

As the people grumble and complain, Zacchaeus stands up and declares, “Lord, I give half of my possessions to the poor—and if I have defrauded anyone of anything, I pay it back fourfold.”

Let’s be clear here—he’s not promising to do this…  This is what he’s already doing because of Jesus. He’s burning the bridges to his opulent lifestyle and boldly moving forward into his new life in Christ.

This is why we symbolize the Holy Spirit with fire—because when Jesus shows up, things change.  People change. Today, on Reformation Sunday, we celebrate this “charismatic combustion”.

Yet this is dangerous, because being a child of God is playing with fire—and we all love the safety of the status quo, even if the status quo isn’t that great.  Who wants to change?

Consider our church: if you’ve been here for a while, everything’s comfortable and safe.  I think the only thing that makes us uneasy here is the attendance.  So how might Jesus shake things up?  Maybe by sending in a Zacchaeus or two?  Maybe by disrupting our plans and best-laid plans? Maybe by taking our greatest failures and using them to teach us something we need to learn?

Since you are loved by Jesus, you have the Spirit—and sooner or later, you are going to feel the heat!

The fires of the Spirit bring your sins to light.  All your failures and shortcomings are exposed.   You see the people you hurt.  And if that isn’t enough, the Spirit’s fire forms and shapes you like steal.  You are purified, you are strengthened, you are transformed into something different than before.  And sometimes, the Spirit’s flame will consume and destroy things that are precious and valuable.

Zacchaeus enjoyed a great deal of power and privilege, even though people hated him.  Martin Luther could’ve lived a fairly comfortable and uneventful life as a monk and a parish priest, if he’d kept his mouth shut about what the Bible really said and kept his 95 theses off the church doors.  And even Jesus could’ve had a fruitful ministry if he’d avoided the cross.

But the Spirit drove Zacchaeus up the tree.  Jesus invited himself over to his house.  The Holy Spirit used Martin Luther to set the Church on fire, because it was broken.  And Jesus gave his life on the cross so that the Holy Spirit could bring his salvation to the ends of the earth.

All this shows that God will not be timid or passive when it comes to loving you.  Sometimes, God will love with you with comfort and gentleness; often God will love you with blazing fire. So are you ready for that fire—not knowing what that fire will bring and what it will do?  Will you pray for that fire?

Are you ready for the fires to break you down—and make you into someone new?  Are you ready to be take risks?  To give away half your possessions; or to repay fourfold those you’ve trespassed against? To go out on a limb to show someone how much they matter to God?  Are you ready to be set on fire?
Posted by Pastor Jim Arter at 5:49 AM No comments:

9[Jesus] also told this parable to some who trusted in themselves that they were righteous and regarded others with contempt:10“Two men went up to the temple to pray, one a Pharisee and the other a tax collector. 11The Pharisee, standing by himself, was praying thus, ‘God, I thank you that I am not like other people: thieves, rogues, adulterers, or even like this tax collector. 12I fast twice a week; I give a tenth of all my income.’ 13But the tax collector, standing far off, would not even look up to heaven, but was beating his breast and saying, ‘God, be merciful to me, a sinner!’ 14I tell you, this man went down to his home justified rather than the other; for all who exalt themselves will be humbled, but all who humble themselves will be exalted.” (NRSV) 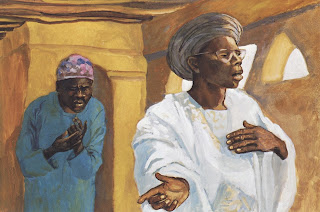 The American Psychological Association is calling it“Election Stress Disorder.”  It is what52% of all U.S. adults are experiencing this election season—because the presidential race is causing just as much stress as the economy, finances, work, or family.

It’s the fear that candidate you despise is going to get elected—and that the country is going to go right down the tubes, along with you, your family, your job, and your life savings…

But that’s not all…  We have become a United States of Two Americas.  There’s “my America”—the good, honest, hard-working, just, freedom-loving people—and then there’s “those people” who’ve nominated a president who will write them a blank check, leaving you in the dirt with the bill.

Let’s not forget that there are Christians supporting both candidates who believe that the other is, essentially, against everything Jesus and the bible stand for.

It happens in the holiest place on earth: the Jerusalem Temple.  Two men enter—one a Pharisee, the other a tax collector.  Morally and spiritually, one of them does not belong—and it certainly isn’t the man who knows the Hebrew Scriptures inside and out, and follows God’s Law to the letter.  It can’t be the man who consistently fasts twice a week and tithes his income…

It must be the one works for the evil Roman government; who uses his authority and his position to extort money from his fellow Jews…  I wonder how many stares and evil eyes he faced as he entered the building from the people who knew who he was and what he was… His being there was like a skunk walking into our sanctuary.  He didn’t belong.

At this point, you’re probably thinking what a wretched man this Pharisee is for his arrogance and pride.  But it’s not a sin to learn the Scriptures and obey the Law!  It’s not a sin to fast and tithe!  He should be thanking God for who he is and what he does out of devotion to God.  Only problem is, he’s giving himself all the credit…

This is what is happening in today’s world.  I’m not going to single out one candidate or political party because it’s bigger than the election.  It’s happening in schools, communities, workplaces, and churches…

Fear and uncertainty are everywhere.  The world is changing rapidly.  We’ve been at war with terror for fifteen years.  The economy is a house of cards in a windstorm.  Up and coming generations are leaving behind the Christian faith.  But instead of kneeling and praying, we’re blaming and attacking. We’re fighting against “those people” who act like the whole world revolves around them… “Those people” who are being allowed to take what’s rightfully ours…  “Those people” who are defiling the one, true faith…

Bear in mind that Jesus clashed with Pharisees all the time.  And—he’d likely been exploited by corrupt tax collectors.  But Jesus ministered among Pharisees, Roman centurions, tax collectors, prostitutes, and pretty much everyone else whom the general public would’ve regarded with contempt.  Many of these people became disciples.  Even a murderer like Saul went on to write two-fifths of the New Testament.

So as we face this very hostile and threatening world, we do well to listen to what Jesus is saying…

Jesus has opened wide the doors of God’s mercy—but you can’t come before God with a chip on your shoulder.  Truth is, we all come before God like the tax collector.  You have nothing with nothing to offer up to God but your complete dependence on God’s mercy.  And God delights to give it to you, because you are God’s child!

But you also need God’s mercy, every bit as much as the world.  You’re a sinner, and as such your actions hurt God’s people.  The reason why we see so much poverty and prejudice and hatred is that some people benefit from it.  We trample on each other to get what we believe to be our rights.  When people say how important this election is, they may just be thinking that if their candidate doesn’t win, they’re going to lose…  Nobody wants to come out on the losing end…

The Kingdom of God doesn’t work that way.  The truth to remember about society’s ills is that we’re in this together.  Our problems are created by people—and only people can solve them, with God’s help.  But as God brings the ugliness of your sins to light, God’s mercy is revealed all the more.  God gives you eyes to see “those people” as members of God’s family, just like you.  God’s kingdom arises when you listen to those people; hear their stories; learn of their struggles.  As the walls of division come down, God’s healing begins.  In God’s kingdom, you can live peacefully with people you don’t like or agree with!  You can face the future knowing that if you fall, someone will be there to pick you up!  Together, we see Jesus more clearly—because it’s no longer “us” verses “them,” but children beloved by one God.

Photo credit: JESUS MAFA. The Pharisee and the Publican, from Art in the Christian Tradition, a project of the Vanderbilt Divinity Library, Nashville, TN. [retrieved October 22, 2016].
Posted by Pastor Jim Arter at 5:34 AM No comments: