[Jesus said:] 19“There was a rich man who was dressed in purple and fine linen and who feasted sumptuously every day. 20And at his gate lay a poor man named Lazarus, covered with sores, 21who longed to satisfy his hunger with what fell from the rich man’s table; even the dogs would come and lick his sores. 22The poor man died and was carried away by the angels to be with Abraham. The rich man also died and was buried. 23In Hades, where he was being tormented, he looked up and saw Abraham far away with Lazarus by his side. 24He called out, ‘Father Abraham, have mercy on me, and send Lazarus to dip the tip of his finger in water and cool my tongue; for I am in agony in these flames.’ 25But Abraham said, ‘Child, remember that during your lifetime you received your good things, and Lazarus in like manner evil things; but now he is comforted here, and you are in agony. 26Besides all this, between you and us a great chasm has been fixed, so that those who might want to pass from here to you cannot do so, and no one can cross from there to us.’ 27He said, ‘Then, father, I beg you to send him to my father’s house—28for I have five brothers—that he may warn them, so that they will not also come into this place of torment.’ 29Abraham replied, ‘They have Moses and the prophets; they should listen to them.’ 30He said, ‘No, father Abraham; but if someone goes to them from the dead, they will repent.’ 31He said to him, ‘If they do not listen to Moses and the prophets, neither will they be convinced even if someone rises from the dead.’ ” (NRSV) 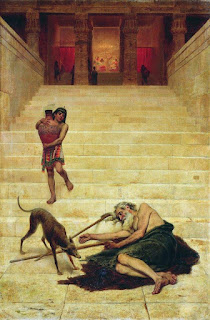 Smartphones have been getting a lot of bad press lately…

The Samsung Galaxy S7 has been prone to catch on fire…

Fans of the Apple’s iPhone are furious because the latest model will not include a headphone jack (to listen to music), forcing you to either use an adapter plug or buy their $159 wireless “Earpods.”

Now it’s no secret that these devices distract drivers, and wreak all kinds of havoc on human social interaction…

But that’s how they affect us.

Yet these people are out of sight, out of mind—just like the man Lazarus, whom we encounter in Jesus’ parable…

It begins with someone literally dumping Lazarus at the gate of an unnamed rich man’s estate and leaving him for dead. While the rich man dressed in the finest clothes and lived lavishly every day, he was blissfully unaware that Lazarus was dying of starvation.  Lazarus was so weak that he was unable to shoo away the dogs who came to lick the sores that covered his body.

Eventually, both men die.  Lazarus was carried away by the angels to be with Abraham.  The rich man went to hell.

He cries out to Abraham, to send Lazarus to show him the mercy that he failed to show Lazarus when they were both alive.  He begs Abraham to raise Lazarus from the dead so he can go and warn his five brothers, who (presumably) lived as he did.  Each time, Abraham refuses.

I don’t know about you, but I’m more than a bit uncomfortable at this point.  Every time I read this, I can’t help but think of all the panhandlers I’ve ever walked past and ignored.  But bear in mind that this isn’t a parable about who goes to heaven and who goes to hell…

The highlight of this parable is God’s grace to Lazarus.  He may have been invisible to the rich man, but he was never invisible to God.  Incidentally, Lazarus’s name means “the one who God helps.”

So do not fall into the trap of questioning whether or not you’re doing enough for the poor and how that will impact you for eternity.  This is a parable about what God is up to—right here, right now.

Jesus is revealing his gracious concern for every single person who suffers sickness, hunger, and death.  Jesus is paying attention to the people whose names are not known; who have no voice, and no ability to help themselves.   Jesus is paying attention to people who are suffering and dying of the blissful ignorance of those who have the means to show mercy, but simply do not.

The life we all are desperate for in this broken world is not found in the places of wealth, privilege, and power—where blissful ignorance runs amok. The TV preachers and bestselling “Christian” authors continue to perpetuate this false teaching that Christ’s love and prosperity go hand-in-hand.

So often, we look for Jesus inside our lives when we should be looking for him outside our lives. You can be the most devout Christian there is in terms of your prayer life, going to church, learning the Bible, and even giving offerings.  But Jesus shall remain a stranger to you if are not present among the people who need him most—because they have nothing else, and no one else…  This is where grace happens.

So think about at all the stuff you spend money on. If you’re like me, you spend a lot of money on things that you think will bring you joy, but they don’t.

I know I bad-mouthed smartphones—but what if you simply paid more attention to the people around you—and talked to them?  What if you took a tenth of your screen time and called up someone who’s hurting; fix them a meal, or send a card?

Looking out in this congregation, I know there’s people who love to travel like me.  What if we took a missions trip together? Would you dare give away your precious vacation time?

Think about the people who serve you—have you thanked them?  Do you know their names?  Do you know what’s happening in their lives?  What their dreams are?

Put it all together, the challenge and the opportunity here is to invest yourself into the economy of amazing grace.  There aren’t haves and have-nots in God’s kingdom.  People aren’t treated as disposable and tossed away to die. In God’s kingdom, we belong to each other—so that when you fall down, someone is there to lift you up.  In God’s kingdom, lasting joy comes in giving your hands and your stuff so that everyone is sheltered, clothed, fed, and loved.  In God’s kingdom, people are more important than possessions—and privilege is following Jesus as his disciples.

1Now all the tax collectors and sinners were coming near to listen to [Jesus.] 2And the Pharisees and the scribes were grumbling and saying, “This fellow welcomes sinners and eats with them.”
3So he told them this parable: 4“Which one of you, having a hundred sheep and losing one of them, does not leave the ninety-nine in the wilderness and go after the one that is lost until he finds it? 5When he has found it, he lays it on his shoulders and rejoices. 6And when he comes home, he calls together his friends and neighbors, saying to them, ‘Rejoice with me, for I have found my sheep that was lost.’ 7Just so, I tell you, there will be more joy in heaven over one sinner who repents than over ninety-nine righteous persons who need no repentance.
8“Or what woman having ten silver coins, if she loses one of them, does not light a lamp, sweep the house, and search carefully until she finds it? 9When she has found it, she calls together her friends and neighbors, saying, ‘Rejoice with me, for I have found the coin that I had lost.’ 10Just so, I tell you, there is joy in the presence of the angels of God over one sinner who repents.” (NRSV)

Our flight to Denver this summer was awful…

Turbulence bounced and jerked the crowded jet almost the whole time—enough to make my body sore from all the movement.

I’d be lying if I said I wasn’t afraid.  It wasn’t mortal terror, but it got me thinking of how fragile human life is.  Soaring seven miles above the land at 500 miles per hour, it only takes one little thing going wrong…

Or, fifteen years ago, four teams of innocuous-looking but-highly-trained and diabolically-committed men to hijack four commercial jets, murder thousands of people, and change our world forever.

I was a junior at Grove City College on that day.  I was getting dressed when a friend of mine asked me to turn on my television, because a commercial jet had crashed into the World Trade Center.  For the next several hours, we watched in stunned silence as the nightmare unfolded.

Today, the World Trade Center has been completely rebuilt.  Two wars have been fought at the cost of trillions of dollars, thousands of soldiers, and countless innocent civilians all across the Middle East.  Terror attacks and mass shootings have become disturbingly commonplace.

There’s only one word to describe how I feel: lost.

We are the lost sheep Jesus describes in today’s Gospel.  But the thing to bear in mind is that no one ever chooses to “get lost.”  It just happens.  You’re lost when you’re threatened and afraid. You get lost when there’s something you desire and you pursue it. You’re lost when you act without being in touch with God.

You are most definitely lost when you think you can make it without God.

One thing that the national tragedies of fifteen years ago should have taught us is how much we all need God.  We as a nation haven’t learned that lesson very well.  But whether you realize your need or not, God is here. 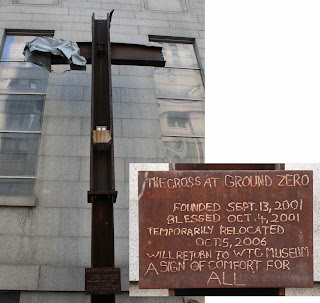 It’s no accident that dozens of crosses like this one emerged from the rubble of Ground Zero.  Even if they hadn’t, Jesus’ cross assures you that Jesus was there when those four airplanes crashed.  He’s there with those people who never saw their loved ones again.  Jesus is present amid the horrors of war, terrorism, and violence, no matter what country it happens in.

In Christ, you are never lost—regardless of where you are, what you’ve done, or what’s happened to you.  But it falls on you to own your “lost-ness.”  After all, what good is grace if you turn your nose up at it?

Do you know anyone who’s ever gotten lost—and flat-out refuses to ask directions?  I see the person I know every time I look in the mirror!

All I can say is thank God that God doesn’t give up on you or me like we give up on God.

Repentance is the change that happens in you when you finally stop resisting God’s grace.  Repentance begins with surrender—and it is a daily commitment to receive Jesus’ good shepherding.

Earlier this week, I spoke to a woman, about my age, who’s been clean and sober for five years after almost two decades of drug abuse.  She told me she used to pray, “God, take me out of this life.”  “God, let me be someone else.”  “Give me wings to fly far, far away.”  But nothing ever changed.  You could say those prayers weren’t answered according to her will.  But then one day, as she was sitting helplessly in a prison cell, she prayed “God, get me through this.”  God answered that prayer.

She was never lost.  But that day, she was found.  She began living found.

But still, if you’re feeling lost, take heart—God hasn’t forgotten you.  Call out to Jesus, because he’s found you—and he’ll help you to find him.  His grace will change the way
·      You see other people
·      You see yourself
·      You see the future.

Repentance is your commitment to follow Jesus through the present into the future unknown.  Without Jesus, you’re lost.  With Jesus, you’re forever found.  So live found.  Be found.